In March 2020, I left my graduate study at Oxford and travelled home to Queens, NY

At 3 pm, I opened the door into our living room to find a very quiet home. Like many immigrant families in Queens, we are nine living in a 2.5-bedroom apartment, ranging from toddlers to octogenarians; and occupancy is ten when I’m home. Though we are nine, everyone lives on a different schedule. Some work nights and some days. So, it’s very unusual to have a quiet home. I saw two figures lying on the living room floor, which has become an extension of everyone’s bedroom and my niece’s play area.

I cheerily exclaimed, “Hellooo! Everyone’s favorite sibling is here”. The two figures on the living room floor moved slightly and groaned. My mom was one of them and got up on her feet, struggling a lot more than the last time I saw her. Coughing and crouched with aches, she went into the kitchen, started making me a cup of Tibetan tea. 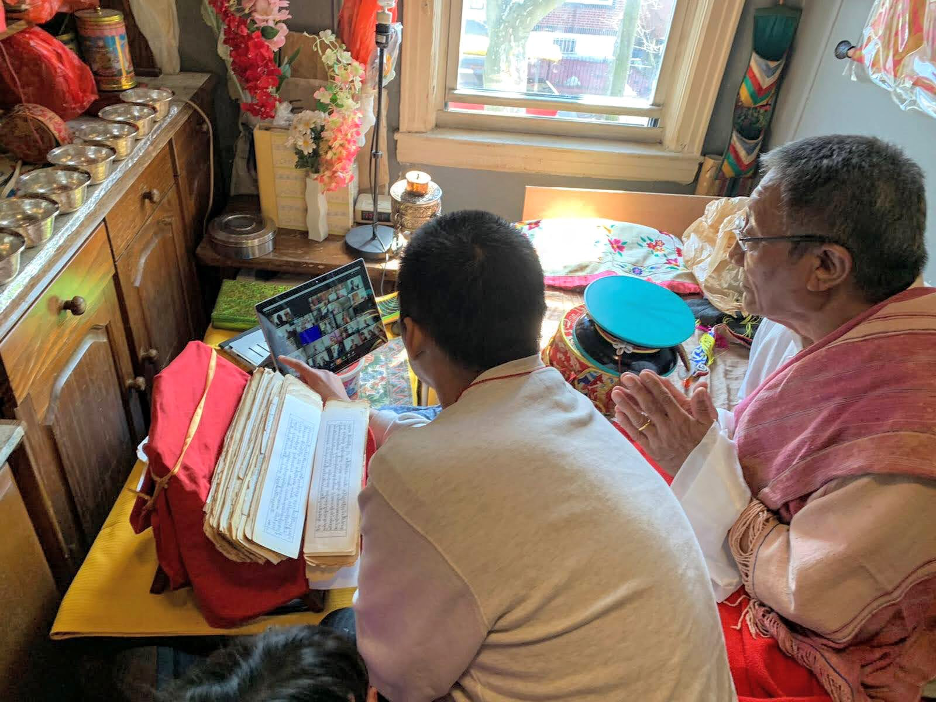 My brother Tenzin helping my dad set up a group prayer and meditation session with community members using Zoom. During normal times, my parents visit the Tibetan Community Center in Woodside and the Sherpa Community Center in Jackson Heights, multiple times a week for prayers and community events. Since we’ve always been traditionally nomadic and now exiled in modern times, shifting to a virtual social environment has been much easier for my parents, compared to their American counterparts.

I found my two-year-old niece, Dawa, jumping excitedly while her cheeks were burning red. I hugged her and felt her running a high fever; nonetheless, she wanted to show me the new dances and songs she had learned from YouTube. She seemed different from the last time I was home. Her daily routine of going to parks, library, and napping with her grandparents has been interrupted with eight adults towering over her all day.

Dawa led me to the bed she shares with her parents. I found her parents coughing and lying on their backs. Dawa’s mom, Sonam, is a nurse at a city hospital in Brooklyn. She has been caring for COVID patients. Dawa’s dad, Tenzin, is my oldest brother. My two brothers, Tenzin and Nima, are NYC yellow cab drivers; they were still picking up unmasked passengers from airports and shuffling them around the city until their leasing company decided to close the week of March 23.

My younger sister, Dewa, sat up on her floor mattress and started taking a work call on patient updates. She is a research coordinator at a cancer hospital in Manhattan; she goes into the office every other day. Dewa put her call on mute and told me our older sister, Pema, a Nurse Practitioner at one of the largest city hospitals, has been isolated in a family friends’ basement because her symptoms were worse than others. Pema had been caring for COVID patients, working 60+ hours a week while commuting an hour each way on the subway between Queens and Manhattan.

I found my dad and uncle in their closet-sized bedroom, which also doubles as our altar room. My dad is 79, and uncle is 80. They each gave me uthuk, an affectionate Tibetan greeting of pressing foreheads and asked me about my London journey to New York. As teenagers, the two were Tibetan guerilla warriors who made the decade-long harrowing journey, fighting Chinese soldiers on foot and horseback, from northeastern Tibet to Mustang, Nepal, and finally making a home in a refugee camp near Kathmandu. So, all my journeys pale in comparison. They spent their nomadic childhood shepherding yaks and sheep in Tibet, their young adult years guerilla fighting on the high plateau, their adult life portering goods up and down the mountains of Nepal, and now in their final act of life, they confined to this 6 x 8 ft room with a small window in Queens, NY.

As I sat down for tea with my mom, holding her arthritic, sandpaper-like palms, she told me that the older couple on the Upper Westside apartment’s she cleans five days a week had told her not to come to work anymore. She then showed me a pile of medical bills and late notice payments under my dad’s name, trying to understand what this all means. My 65-year-old mom’s lines have deepened on her face since I last saw her. 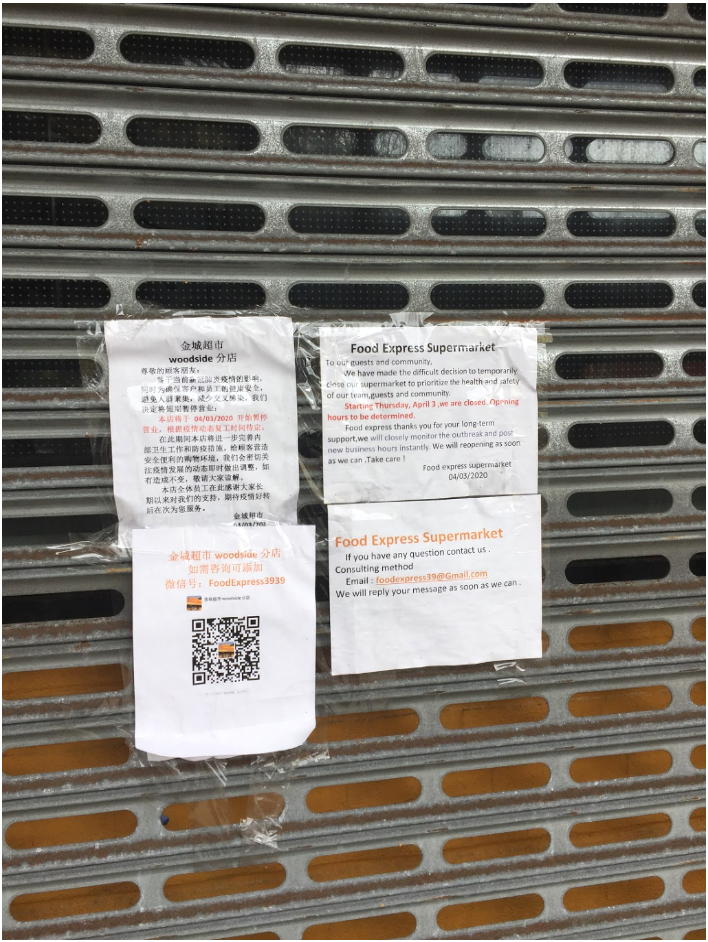 Queens is a borough built with small immigrant businesses. We buy our vegetables from the South Asian supermarket, our rice from the Chinese grocer, and our meat from the Halal butchers. Three of the five groceries in our fifteen-block radius have closed indefinitely as of April 20. The closed sign, like the one above, is salient. The ones that are still open have 2-3 hour wait lines with prices gouged and supplies low.

My mom is still in denial that we are all sick with COVID. She grew up in 1950s Tibet, when a third of her village in Dingri, including her siblings, died from a small-pox outbreak. The ill are quickly excommunicated from the village; rituals are performed to out the malicious omen, and disease is seldom talked about. The stigma of illness continues to seep into our daily lives. Everyone had pretended that everything was normal until I arrived home.
Growing up in a Tibetan refugee camp in Nepal, contracting and evading public health hazards were part of our rite of passage. 1 in 5 children in my community school had tuberculosis (TB) infection. TB rates in the Tibetan refugee community is 5 to 8 times higher than the global average. I was heartbroken when my mom and brothers had TB. Death was imminent, and disease prevalent.
My mom bears the weight of all this more heavily than the rest of us. She still can’t imagine losing any more children as she has. She copes by spending most of her day in prayers or on her smartphone. Living in the exiled-Tibetan diaspora, my family is used to building a virtual environment to stay connected with their siblings in Nepal, Tibet, India, and all over the United States. My parents’ hands always look uneasy and shaky when they hold a pen between their fingers, but it’s effortless when they are on their smartphones.
I spent the rest of the afternoon attempting to file for unemployment for my mom and brothers, food stamps, and social security supplement for my dad. It’s been seven weeks since I suspended my graduate study at Oxford, and since then, I’ve been waiting for our calls to be answered. 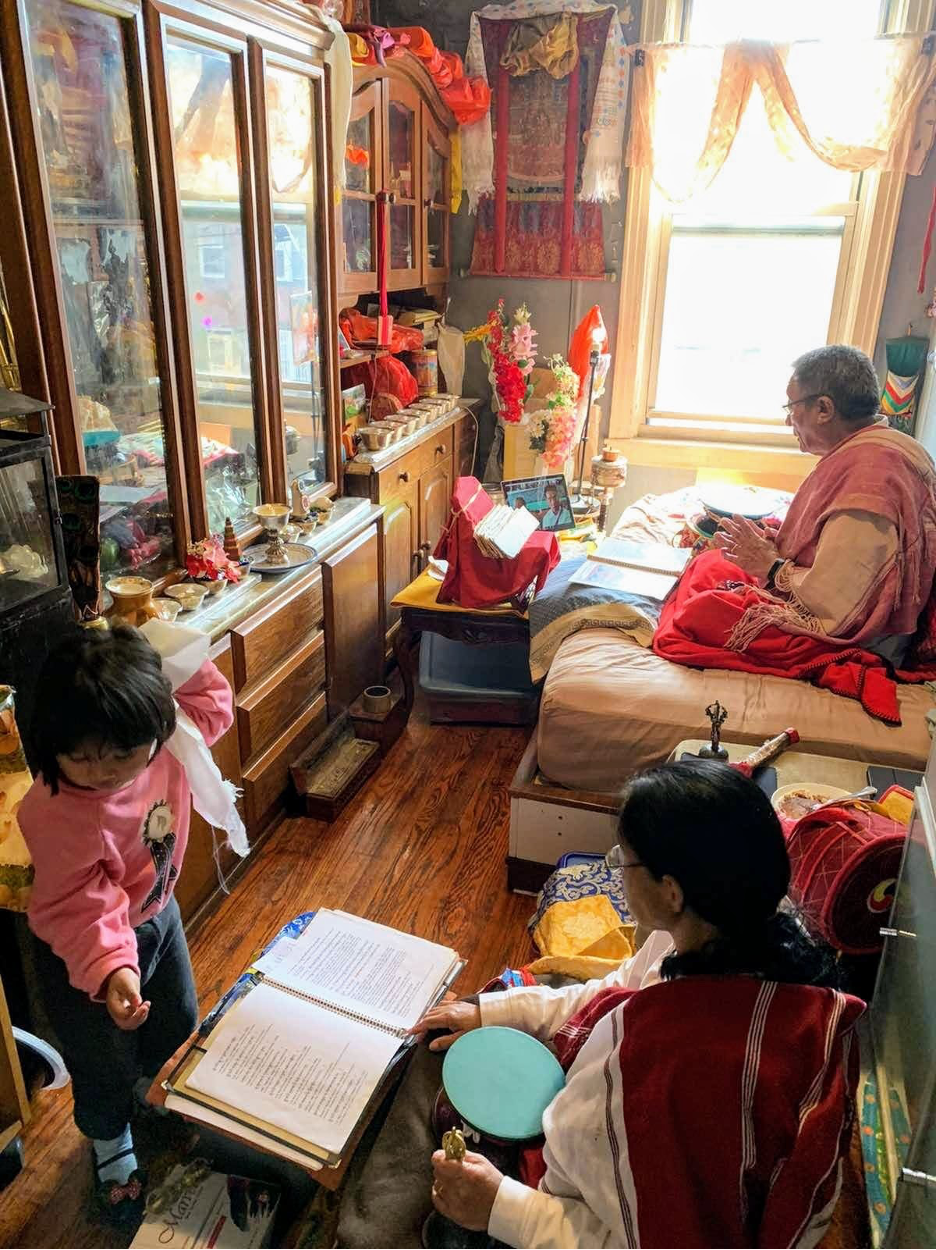 My mom, dad, and niece in our altar room, which also doubles as my dad and uncle’s bedroom. My parents perform Chöd, an indigenous Tibetan tantric practice that precedes Buddhism, tapping on fear and selflessness to realize ultimate emptiness.

My family is one of the few lucky ones in our community to survive this pandemic with all members intact. We have all tested positive with antibodies now. Many of our neighbors have lost loved ones. We light butter lamps and pray for them every day. Dewa, Pema, and Sonam are all back on the frontlines. We joke that nursing is the Tibetan American dream, fulfilling our cultural priority of practicing compassion while securing a pathway to middle-class America.